You are here: Home » IT Band Syndrome 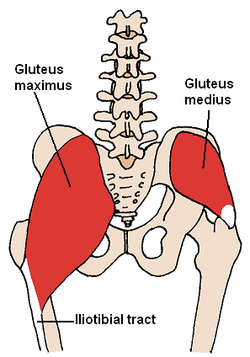 Iliotibial (IT) Band
(Photo by Wikipedia)

One of the most common sports injuries, especially for running athletes, is IT band syndrome. The IT band, part of the iliotibial tract, is a band of tendinous tissue running down the lateral part of the thigh and attaching just below the outside of the knee. Pain with ITB syndrome is usually located on the outside of the knee and is usually at its worst when the knee is bent about 30 degrees. The IT band emerges from the fascia of several of the hip muscles, but it has indirect connections all over the body. The band is technically just the part of the ilio-tibial tract closes to the knee, but many use the terms interchangeably. With ITB syndrome, swelling on the outside of the knee is common and the pain can be sufficient to require that the athlete cease their running program. ITB syndrome tends to be most prevalent in runners who run on hard surfaces like pavement or asphalt, due in part to the surfaces themselves and in part due to the fact that paved roads are often on a pitch (rounded). The traditional view of IT band syndrome is that it’s caused by road running, over-pronation and ill-fitting footwear. While all of these can be contributing factors, ITB syndrome most commonly has one fundamental cause: instability of the hip. A woman with IT Band Syndrome

Individuals with ITB syndrome generally exhibit poor stability in the front plane. The frontal plane is the plane of motion involved in side-to-side movements. When the hip is unstable, meaning the muscles and other tissues of the hip aren’t preventing unwanted motion in the hip during functional movement, the body is unable to properly support the load of the body on the hip or the forces coming up through the ground. The result is commonly found to be over-pronation, the knee coming in, the hip rotating inward, the hip shifting outward, and the non-weight-bearing side dropping. This places tremendous stresses through the hip and knee, against which the muscles which tense the ITB attempt to stabilize. A compensation is required. The ITB becomes very tight and painful. As the knee bends under load, the thin, tendinous band portion of the IT tract will often rub over the bony outside of the knee, sometimes even clicking or popping. This often results in inflammation and tendinopathy of the IT band.

In my clinic, one of the first things I assess with an ITB syndrome client is how well they stabilize when standing on one leg. Suffice to say, the answer generally comes back POORLY with the vast majority of clients. If one can’t support their body weight on one leg without the above mentioned compensations, how can they be expected to support themselves when enduring loads of up to SIX TIMES their own bodyweight when running? Simply put, they can’t…. and they pay for it. Treatment for ITB syndrome frequently consists of orthotics, working on stride mechanics and release of the ITB, generally using a self myofascial release technique such as foam rolling. Many will get relief from such protocols. However, they sort of miss the point. Without stabilizing the hip (and pelvis), symptoms are sure to return. When treating ITB syndrome, I (and the client) will know I’ve resolved the key dysfunctions when I feel the ITB syndrome instantly relax… generally without foam rolling or any other release of the ITB. It will relax because that tension is no longer necessary. Once corrected, I assign corrective exercises to reinforce the correction. Do I look at all the other factors involved in ITB syndrome such as the feet and the stride? Absolutely. However, after stabilizing the hip, they are frequently rendered unnecessary. Sign Up To Receive My Monthly Health And Wellness Newsletter